It had seemed a clever notion to pitch camp near the gorge. No chance of anyone sneaking up behind. Now, as Logen slid over the edge of the cliff on his belly, the idea lost much of its appeal. His hands scrabbled at the wet earth. Only dirt and brown pine needles. His fingers clutched, clutched at nothing. He was beginning to fall. He let go a little whimper. His hands closed around something. A tree root, sticking out from the earth at the very edge of the gorge. He swung in space, gasping, but his grip was firm.

It would take more than a few Flatheads to put an end to Logen Ninefingers. He started to pull himself up onto the bank but couldn't manage it. There was some great weight around his legs.

He peered down. The gorge was deep. Very deep with sheer, rocky sides. Here and there a tree clung to a crack, growing out into the empty air and spreading its leaves into space.

The river hissed away far below, fast and angry, foaming white water fringed by jagged black stone. That was all bad, for sure, but the real problem was closer to hand. The big Shanka was still with him, swinging gently back and forth with its dirty hands clamped tight around his left ankle. It was quite a scrape he was in.

He'd been in some bad ones alright, and lived to sing the songs, but it was hard to see how this could get much worse. That got him thinking about his life. It seemed a bitter, pointless sort of a life now.

30 Books You Should Read at Least Once in Your Life

No one was any better off because of it. Full of violence and pain, with not much but disappointment and hardship in between.

His hands were starting to tire now, his forearms were burning. The big Flathead didn't look like it was going to fall off any time soon.

In fact, it had dragged itself up his leg a way. It paused, glaring up at him. If Logen had been the one clinging to the Shanka's foot, he would most likely have thought, 'My life depends on this leg I'm hanging from-best not take any chances.

Trouble was that the Shanka didn't think that way, and Logen knew it. So it wasn't much of a surprise when it opened its big mouth and sank its teeth into his calf.

There wasn't much root left to hold on to, now, and what there was looked like snapping off any moment. He tried to think past the pain in his hands, the pain in his arms, the Flathead's teeth in his leg. He was going to fall. The only choice was between falling on rocks or falling on water, and that was a choice that more or less made itself. Once you've got a task to do, it's better to do it than to live with the fear of it.

That's what Logen's father would have said. So he planted his free foot firmly on the rock face, took one last deep breath, and flung himself out into empty space with all the strength he had left.

He felt the biting teeth let go of him, then the grasping hands, and for a moment he was free. Then he began to fall. The sides of the gorge flashed past-grey rock, green moss, patches of white snow, all tumbling around him. Logen turned over slowly in the air, limbs flailing pointlessly, too scared to scream. The rushing wind whipped at his eyes, tugged at his clothes, plucked the breath out of his mouth. He saw the big Shanka hit the rock face beside him. He saw it break and bounce and flop off, dead for sure.

That was a pleasing sight, but Logen's satisfaction was short-lived. The water came up to meet him. It hit him in the side like a charging bull, punched the air out of his lungs, knocked the sense out of his head, sucked him in and down into the cold darkness. That was the first thing. The lapping of water, the rustling of trees, the odd click and twitter of a bird.

Logen opened his eyes a crack. Light, blurry bright through leaves. This was death? Then why did it hurt so much? His whole left side was throbbing. He tried to take a proper breath, choked, coughed up water, spat out mud. He groaned, flopped over onto his hands and knees, dragged himself up out of the river, gasping through clenched teeth, rolled onto his back in the moss and slime and rotten sticks at the water's edge.

He lay there for a moment, staring up at the grey sky beyond the black branches, breath wheezing in his raw throat. Still alive, in spite of the best efforts of nature, Shanka, men and beasts. Soaking wet and flat on his back, he started to chuckle. Reedy, gurgling laughter.

Say one thing for Logen Ninefingers, say he's a survivor. A cold wind blew across the rotting river bank, and Logen's laughter slowly died. Alive he might be, but staying alive, that was another question. He sat up, wincing at the pain. He tottered to his feet, leaning against the nearest tree trunk. He scraped the dirt out of his nose, his eyes, his ears. He pulled up his wet shirt to take a look at the damage. His side was covered in bruises from the fall. Blue and purple stains all up his ribs.

Tender to the touch, and no mistake, but it didn't feel like anything was broken. His leg was a mess. Torn and bloody from the Shanka's teeth. It hurt bad, but his foot still moved well enough, and that was the main thing. He'd need his foot, if he was going to get out of this.

He still had his knife in the sheath at his belt, and he was mightily glad to see it. You could never have too many knives in Logen's experience, and this was a good one, but the outlook was still bleak. He was on his own, in woods crawling with Flatheads. He had no idea where he was, but he could follow the river. The rivers all flowed north, from the mountains to the cold sea. Follow the river southwards, against the current.

Follow the river and climb up, into the High Places where the Shanka couldn't find him. That was his only chance. It would be cold up there, this time of year. Deadly cold.

He looked down at his bare feet. It was just his luck that the Shanka had come while he had his boots off, trimming his blisters.

No coat either-he'd been sitting near the fire. Like this, he wouldn't last a day in the mountains. His hands and feet would turn black in the night, and he'd die bit by bit before he even reached the passes. If he didn't starve first. He had to go back to the camp. He had to hope the Flatheads had moved on, hope they'd left something behind. Something he could use to survive. That was an awful lot of hoping, but he had no choice.

He never had any choices. It had started to rain by the time Logen found the place. Spitting drops that plastered his hair to his skull, kept his clothes wet through. He pressed himself against a mossy trunk and peered out towards the camp, heart pounding, fingers of his right hand curled painful tight around the slippery grip of his knife. He saw the blackened circle where the fire had been, half-burned sticks and ash trampled round it. He saw the big log Threetrees and Dow had been sitting on when the Flatheads came.

He saw odd bits of torn and broken gear scattered across the clearing. He counted three dead Shanka crumpled on the ground, one with an arrow poking out of its chest. Three dead ones, but no sign of any alive. That was lucky. Just lucky enough to survive, as always. Still, they might be back at any moment. 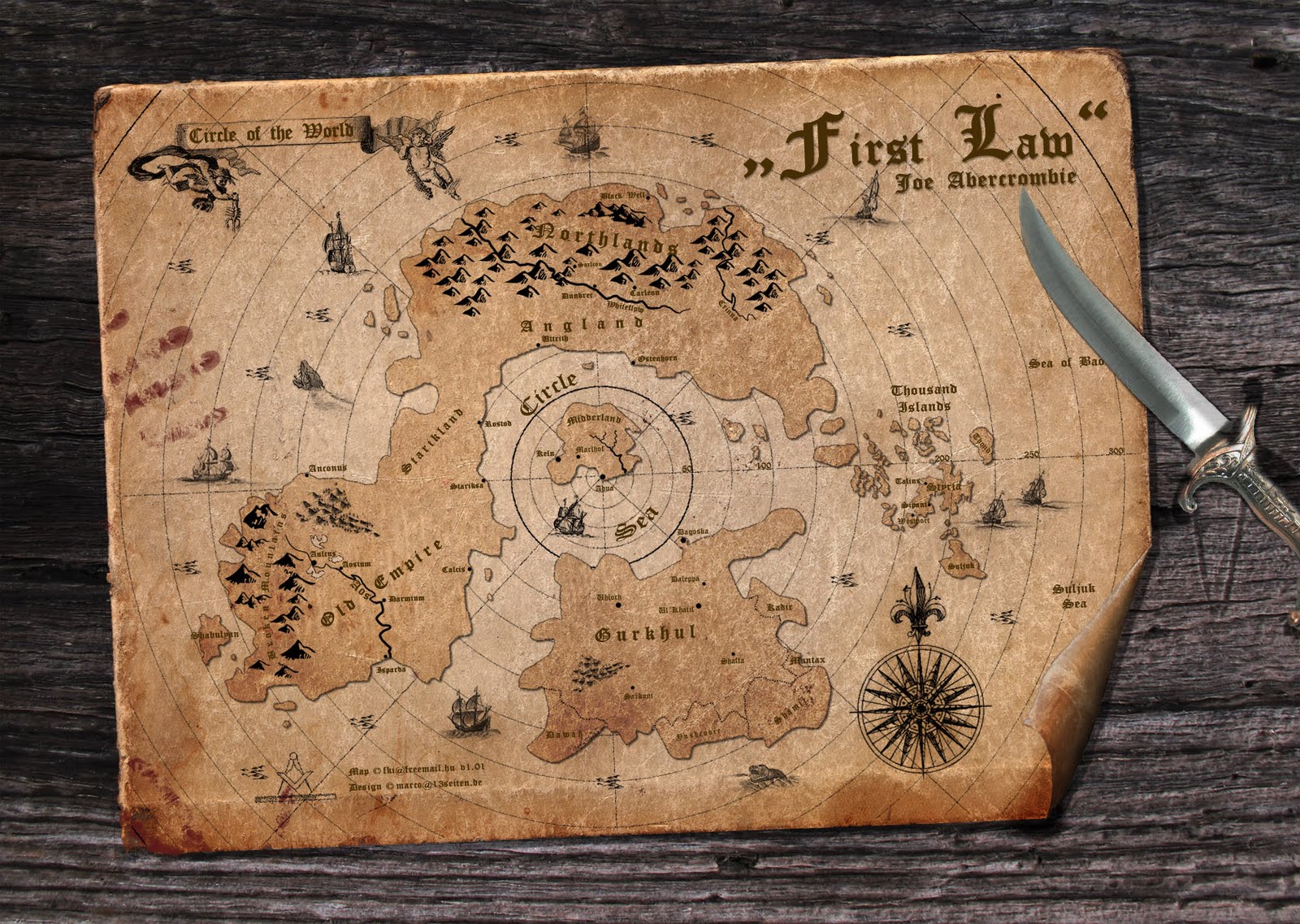 He had to be quick. Logen scuttled out from the trees, casting about on the ground. His boots were still there where he'd left them.

He snatched them up and dragged them on to his freezing feet, hopping around, almost slipping in his haste. His coat was there too, wedged under the log, battered and scarred from ten years of weather and war, torn and stitched back together, missing half a sleeve.

His pack was lying shapeless in the brush nearby, its contents strewn out down the slope. He crouched, breathless, throwing it all back inside.

A length of rope, his old clay pipe, some strips of dried meat, needle and twine, a dented flask with some liquor still sloshing inside. All good. All useful. There was a tattered blanket snagged on a branch, wet and half caked in grime.

Logen pulled it up, and grinned. His old, battered cook pot was underneath. Lying on its side, kicked off the fire in the fight maybe.

He grabbed hold of it with both hands. It felt safe, familiar, dented and blackened from years of hard use. He'd had that pot a long time. It had followed him all through the wars, across the North and back again.

They had all cooked in it together, out on the trail, all eaten out of it. Forley, Grim, the Dogman, all of them. Logen looked over the campsite again. Three dead Shanka, but none of his people. Maybe they were still out there. The first law trilogy [epub] download. 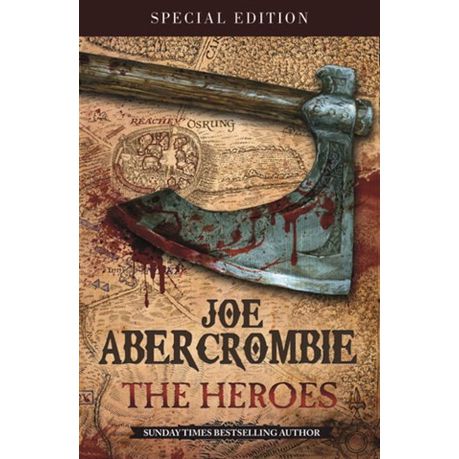 WordPress Shortcode. Published in: Full Name Comment goes here. Are you sure you want to Yes No. Be the first to like this. No Downloads. Views Total views. Actions Shares. Embeds 0 No embeds. No notes for slide. The first law trilogy [epub] download 1.

Book Details Author: Joe Abercrombie Pages: Orbit Brand:His boots were still there where he'd left them. It had started to rain by the time Logen found the place. That was an awful lot of hoping, but he had no choice. An awful lot. The rushing wind whipped at his eyes, tugged at his clothes, plucked the breath out of his mouth. Published on Jul 1, A length of rope, his old clay pipe, some strips of dried meat, needle and twine, a dented flask with some liquor still sloshing inside.

We use your LinkedIn profile and activity data to personalize ads and to show you more relevant ads.

CHRISTOPHER from Arizona
Also read my other posts. I have only one hobby: western pleasure. I relish enthusiastically .